When gums first start bleeding, it is normally a sign of early stage gingivitis, a pre-infection. Bacteria are attacking, but they haven’t destroyed the gum’s seal around the tooth yet. If the bleeding continues, eventually the infection will break through the gums and form early stage deep gum infection called periodontitis. So what’s the practical difference between gingivitis vs periodontitis.

How to stop bleeding gums?

To figure out how to stop something, we often need to know how it started. The whole problem of bleeding gums starts when bacteria get under gums and around the teeth. These invading bacteria cause the irritation and inflammation, ie gingivitis. Fortunately, gingivitis is easy to stop! How to stop bleeding gums? Remove the invading bacteria and stop them from moving into your gums. Doing this is literally as simple as getting a specialized gingivitis cleaning and then maintaining that clean at home everyday. Keep reading to find out about Gingivitis Cleanings and what makes them different from a Regular, 6-month Cleaning.

“Wait – Did You Just Say There Are TWO Kinds of Dental Cleanings???”

Yup. And actually there are  five types of dental cleanings and each one treats a specific mouth condition. The basic every-6-month cleaning we all know about is a preventative cleaning and will NOT cure widespread gingivitis. “Why won’t it cure gingivitis?” you ask. Great question! Keep reading.

Why Doesn’t a “Regular” Cleaning Do the Job?

Preventative dental cleanings do not cure whole mouth gingivitis because of what they DO NOT do. Basic cleanings include 30-45 minutes of plaque, tartar and bacteria removal off the teeth and above the gums. So a “Regular” cleaning takes care of healthy teeth, which means everything ABOVE the gums. But where is the problem in gingivitis? UNDER the gums.

(Just FYI, the 30-45 minutes of active cleaning time in a regular cleaning is the amount of time that it takes for a good hygienist to adequately clean healthy gums and teeth. If a hygienist spends less time than that actively scraping and polishing, you either have incredibly low build-up or you’re getting ripped off. It’s true that my wife’s cleanings are about 20 minutes of cleaning time but she has unusually clean teeth.)

So What Kind of Cleaning DOES Cure Gingivitis?

If you have gingivitis, that is a build up of bacteria UNDER the gums and it is going to require additional time, tools and techniques to treat the active infection and remove the additional build up UNDER the gums. In advanced gingivitis, this can’t even be done in one visit because advanced build up makes the gums so puffy that it’s impossible to see well enough to finish the cleaning. Once the bulk of the bacteria and buildup has been removed in the first visit, the gum tissue responds and shrinks, allowing the hygienist to see clearly any areas needing additional attention during the second visit. To treat gingivitis effectively, a hygienist needs to perform a thorough cleaning therapy using ultrasonic cleaning instruments as well as antibiotics and laser therapy.  Gingivitis therapy cures the infection giving the gums a clean, new start.

If it’s so simple to stop the bleeding, why do people ignore it?

Unfortunately, many people don’t take these solutions or bleeding gums seriously. Why do they ignore the problem? Maybe because they don’t realize how quickly bacteria can go from causing reversable gingivitis to permanent damage. Don’t let the fact that it doesn’t really hurt fool you! Bleeding gums are a sign of infection. Stop the infection before it costs you your teeth.

Reason #2: They Believe It’s Too Expensive

Another reason people avoid treating gingivitis is that they believe it’s going to be too expensive. Obviously, it does cost money. The question to consider before you put gum health on the back burner is not how much it will cost to fix the gingivitis, but how much will it cost you to lose your teeth. We help people every day replace teeth that they’ve lost to gum disease and they all say the same thing. “I wish I would have taken care of my teeth before I lost them.” Remember, complex dentistry is always the most expensive dentistry. If spending several hundred dollars a year to keep your teeth healthy seems too expensive, consider the several to many thousands of dollars it will cost you to replace them once their lost.

I Shouldn’t Be Telling You This

I’d be doing myself a favor to not tell you this part. Nobody knows better than a dentist how much everybody would rather skip the dentist when things don’t “feel bad.” Shoot, I make a lot more money on major mouth re-building cases than on minor fixes like gingivitis. Take it from me – fixing the small things is always the way to go if you’re trying to save money on dentistry. If you’d rather not fix the small things, please save my number. You’re gonna need it some day and I’m really good at replacing lost teeth. 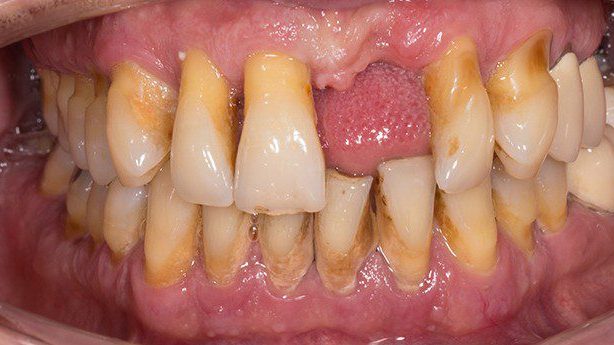 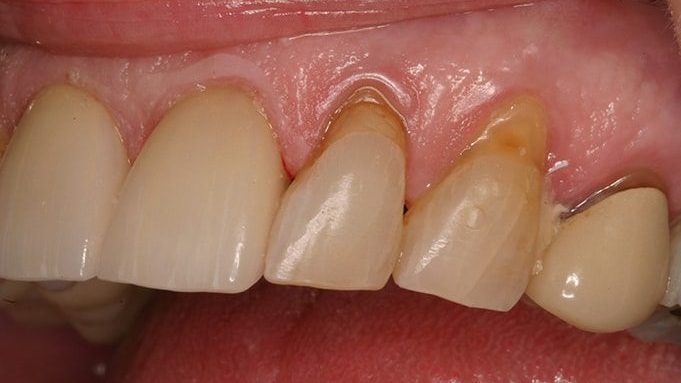 Can you see the yellow tooth root and swollen gums above it? This is what happens when gingivitis isn’t treated.

Click below to learn more about how we stop gingivitis in its tracks!

Click below to learn more about how we stop gingivitis in its tracks!

Dental Cleanings: Keeping Your Teeth in Your Smile

Most of us know that dental cleanings are important, but not everyone knows why.

What if we told you that nearly half of adult Americans had an incurable disease?

Bleeding Gums: NOT a big deal -Until it IS!

Because gingivitis doesn’t usually hurt and it doesn’t always even affect the whole mouth, people often feel like gingivitis is not a big deal. They also can’t understand why a ‘regular cleaning’ won’t solve their problem. I just want a regular cleaning is something we hear all the time from people with active gingivitis.

For a second, let’s forget we’re talking about teeth and let’s talk about dishes. Your dishes touch the same food that your teeth do. Imagine if you just casually rinsed your dishes with water once a day and only washed them with a scrubber and soap once every year or two. Disgusting, right? How hard is it going to be to clean the built up grease and gunk on those dishes after a year or two of only rinsing with water? HARD!

That’s how it works in your mouth too. Imagine the difference between cleaning out basic build up and bacteria compared to removing over a year’s worth of leftover food which has now hardened onto the teeth as calculus or tartar. That gunk is not only stuck on the teeth, but it is providing a constant source of bacteria which are attacking your body 24/7. No wonder gums get irritated and red. If your gums are all red and puffy and someone tells you that all you need is a regular cleaning, be warned: We all know that anyone who says that a “normal wash” cycle on your dishwasher can clean of a year of harded gunk off your dishes is crazy. Now we know that it works the same way for teeth. Don’t be fooled. It doesn’t work for dishes and it won’t work for teeth either. If you have gingivitis, you need a gingivitis cleaning to clear things up before you can go back to your regular cleanings. Regular cleanings are for regular levels of build-up.